In the studio after my travels in the south west and it’s good to be back. Stretching and priming canvases today in preparation for starting some new commissions next week. Monday will see me at Bootham Quaker school in York where I’m commissioned to paint the headmaster. They have paintings of past heads dating back to the middle of the 19th century; some good, some not so good, but all have a distinct feeling of the time in which they were painted and by that I mean that the style or manner of the paintings sets them firmly in the period in which they were produced regardless of the clothing and attitude of the sitters themselves. So, I wonder whether with the benefit of hindsight, my portrait too, will be so obviously of its time or will it perhaps transcend it. Obviously I would prefer it to be a timeless piece but that may be hoping for too much. 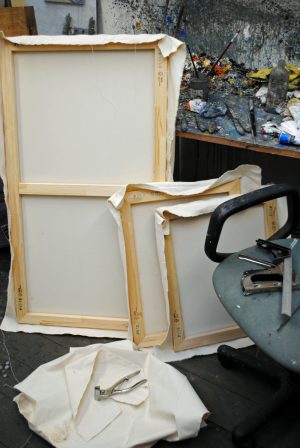 Jonathan (the head) has set aside half a dozen or so two hour slots in his diary to begin the painting, which may well be necessary but with the speed I’ve been painting lately, it could be done in a couple of hours!