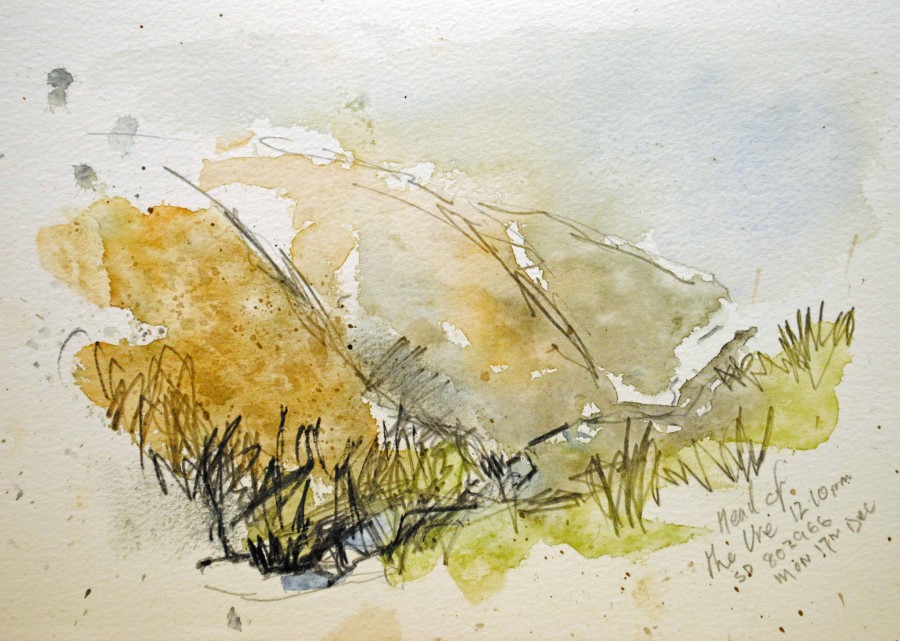 It’s not that I’m completely unsociable – I can talk shite over a pint of Black Sheep as well as the next man, but when I’m working I have to give it my full attention; I’m not clever enough to do otherwise. So here we are: Rob (who’s chatty),  and me (who isn’t), heading up to the source of the Ure, high on the pennine watershed of England so that I can make a picture of the river’s birth for the ‘River Ure Project’. It feels important that I should do this early on in the project – that an understanding of its beginning will inform my impressions as it grows.  I normally do these trips alone but as Rob was at a loose end, I’d invited him along and we’ve not known each other long. It’s not easy to be companionably silent with someone you don’t know very well, but after a loquacious start during which I begin to worry that the paints will remain dry and the paper unsullied, we settle to a workable conviviality.

The drive takes us the length of Wensleydale, following the Ure all the way, to the bustling dale-head town of Hawes, astir with wellie booted, rolling hipped farmers collecting winter provisions against the threatened snow. Hawes has a frontier town edge that I like – characterised by a cavalier attitude to parking and vehicle maintenance (battered 4 x 4s happily abandoned within hailing distance of the curb), and a friendly, yet utilitarian welcome for those engaged in ‘outdoor pursuits’. It is not genteel but it is genial.

On past Hawes, we reel with the Ure, crossing and re-crossing it until we get to the Moorcock Inn where we turn right into the Eden valley; Baugh Fell and the Howgills to our left, Great Shunner Fell to the right. The valley is an ancient route: Many of the geographical features have Norse names, but it’s history stretches back through the Romans, who used it to connect their forts and settlements in Wensleydale with those along what is now the A66, and beyond that, to the bronze age and the Mesolithic.

We park by the Settle – Carlisle railway line which, though we are in the valley bottom, reaches its highest point near here of nearly 1,200ft OD. Pulling on boots, waterproofs and rucksacks we set off along a gently rising gravel track which brings us to the elegantly curvaceous structure of How Beck bridge and we wonder why anyone would build with such élan in this seemingly unvisited place. Crossing the tumbling stream, the track begins to steepen and we soon come to another, much smaller footbridge; this is Green Bridge, the first structured crossing of the Ure – the first punctuation mark in its 74 mile journey and here we leave the track and begin to follow the river itself. The ground rises sharply, Our thighs protest at the incline, breathing becomes laboured, conversation intermittent and soon we are enveloped in cloud. We pick our way through the peat-boggy ground, cresting false summits, following the ever dwindling beck until finally it disappears altogether into a hummocky world of course grasses, sphagnum moss and black water. I think I’d expected a spring – the pointy end of the river spearing into the earth but it isn’t like that, it is an inconsequential, undetermined discontinuance: the river smeared across the earth.

The heavy sky is one with the land. There are no edges in this abstract, Mark Rothko world. Searching for the first murmurings of the river’s life I become aware that for the very briefest moment in a vast stretch of time, I have become the river’s source – that the water dripping from my nose and the hood of my waterproof jacket is the embryonic Ure. There is no sound other than trickling water and the distant grroak of a wheeling raven. The overwhelming sense is of being somewhere ancient – a place where the measured and monumental passing of time saturates consciousness just as the weeping pall suffuses the bog around me. There is no discernible trace of  animal or human life here; elsewhere there are evidences of mans passage: footprints, tracks, paths. Further down the fell are the faint parallel lines pressed into the earth by the farmer’s quad bike which we had used as a way-marker to avoid the boggiest areas, but here the ground is so soft, so self healing that all traces of passage have been subsumed – there is no recent past; only time’s stretch.

Dropping the rucksack off my back, I open the little box of watercolours and fill a jam jar from the trickle of river, meaning that I begin painting the river with the river – a symmetry that pleases me. Rob falls silent and discreetly wanders off to leave me to it. Despite the thick surrounding clag there is muted autumnal colour everywhere and I work fast to capture as much as I can of this ever changing, ever constant place. My fingers quickly become numb with the cold and my feet sink slowly into the squelch and suck of the mire but this is the only way to paint – the only way to suffuse a picture with the true tenor of place. Slivers of residual snow cling to the hillside and lend light to the land and a small Velux of blue sky opens briefly overhead. As it does so a previously unseen panorama of distant Wild Boar Fell and the valley bottom opens up and a toy train slides silently along the line from Garsdale Head; a reminder of how industrial and populous this land once was.

The picture is finished quickly and it is spare and elemental: created in and of the environment, spattered with rain, with river; but the environment keeps working on it and it won’t dry – the little  pools of watercolour continue to flow about the paper’s surface, refusing to be contained. Rob and I build a rucksack tent to protect the picture from the drizzle and we each perform some freeform country dancing in order to bring circulation back into our extremities. The painting isn’t dry but there’s only a certain amount of time you can spend dancing around on a mountain top in the rain before the merriment wanes so we pack up and head back down.

On the way home in the car we join the river again, this time travelling with the flow. It is only a stream here, but it is no gentle lowland beck content to wander; it is made of shattered windscreen glass, of diamond light, it is eager and impatient like a cocky young fighter about to enter the ring – it’ll make you see stars, punch your lights in. we pull over and I make another quick picture sitting on a low wall next to the car; It’s nice to have the certainty of a refuge from the cold and it means I can blow-dry the painting in the blast from the car’s heater.