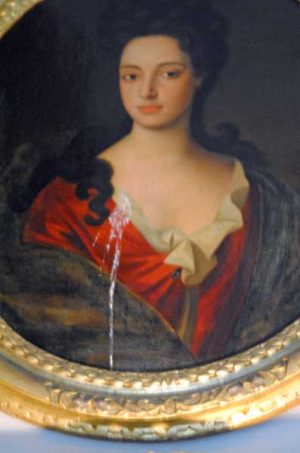 I don’t know about you but I can get more bored, more quickly in a ‘stately home’ than almost anywhere else on earth – rows of marble busts of the nameless and noseless – 18th century copies of a haul ‘found’ in a brothel in Herculaneum, landscaped gardens – primped, straightjacketed and proudly asserted to be an exact copy of the original layout by Moulton and (Capability) Browne, and perhaps worst of all: the paintings – row upon row of second and third rate family portraits and the inevitable ‘Landscape with Levitating Cows’. If you’re lucky, there might be a Reynolds of the 6th Earl dressed as a Hussar (huzzah!) but since the £15 guidebook (foreword by the present Earl) doesn’t come with a free stepladder and torch, it could just as easily be the picture of ‘The Fallen Madonna with the Big Boobies’ of Allo, Allo fame.
And the attendants! Solidly M&S class, Pringle jumpered, pressed chino’d and steeped in the family history of the current ‘temporary guardian’ – “I was telling young sir Harry only yesterday”. They can be relied upon to tell you just what you don’t want to know exactly when you don’t want to know it. I was accosted by one last summer when we visited one of the more celebrated ‘attractions’:
‘Magnificent isn’t it’, he said. ‘One of a pair painted for this room it shows the Lagoon and to the right is the Doge’s palace’.
‘I was looking at the Stubbs’, I said.
‘Of course the family were frequent visitors to Italia and this exquisite pair from Canaletto’s later period were commissioned from the artist by the 7th Earl on his Grande Tour of 1742’.
‘Yes but I was looking at the…..oh never mind’.
So yesterday we ended up visiting friends who’s family happen to have lived at Norton Conyers House since 1642! It’s a grade II listed late medieval manor house with Stuart and Georgian additions in the Ure valley just outside Ripon. Last time I visited, all of the paintings were in storage and dust sheets covered the furniture as some major restoration work was under way. This time the dust sheets are off but Lady Graham is in a bit of a tizz as she’s spent the past three hours trying to eject a couple of Swallows who’d managed to get into the great hall without paying and were reluctant to leave. By the time we arrive she has somehow ejected them but they have been kind enough to sign the visitors book – well in the sense that they have guano’d down a couple of paintings. it seems that the Grahams don’t have an immediate solution to this problem and time is of the essence given the acid nature of their deposit.
In no time at all I find myself precariously teetering on tip toe atop a rickety step ladder, a little plastic cup of distilled water in one hand, a cotton bud in the other, gently swabbing away at the comely breast of a 17th century Lady Jane Graham; she gazes provocatively into my eyes. She’s a bit of a ‘looker’ is Lady J. and I can’t help feeling a little impertinent as I fiddle about with her hooters. The step ladder isn’t really tall enough and I’m trying to work by the fitful beam of an ancient angle poise lamp, whilst my wife and Lady G discuss flower arrangements at ground level and offer helpful comments. But an hour or more later and half a box of cotton buds (now christened ‘poo sticks’) down, I take my leave of the rose lipped lovely and turn my attention to the second guano’d Graham; this time it’s the somewhat less alluring Sir Guy Graham, 9th Baronet and grandfather to Sir James, the present holder. He (Sir Guy) studiously ignores me as I swab away at his tunic and another arm aching, eye squinting hour passes but in the end, both illustrious ancestors are rendered dropping free and I can climb down from my lofty and perilous perch.

Later we are taken on a guided tour of the house and delightful walled gardens by Lady G. It is a lived-in house on a human scale with imperfections and anomalies and it is this, I realise that charms me about the place – that and my own interaction with it – can you imagine being asked to clean bird shit off a Bruegel in Blenheim or a Chardin at Chatsworth? We come away with a pleasing sense of having contributed in a small way to the ongoing life of this ancient house, and with several large tupperware boxes full of soft fruits from Lady G’s copious 17c freezers. 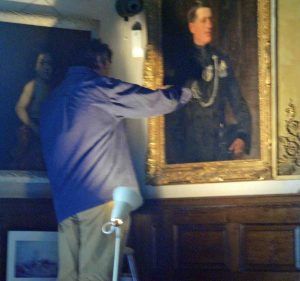