Another bitter day and snow is whipping in from the east. I’m going up to Kilgram bridge to make a snowy picture of the river Ure but already as I set off, the weather is closing in. Winding up the dale the car begins to slide her back end about like a prostitute on a bar stool and much as I hate being beaten by the weather, it soon becomes obvious I’ll have to turn back.

Trying not to get stuck in the  rutted gateway as I spin the car, I see a couple of disgruntled horses in the field, heads down and hunched against the driving wind and snow. They look like the unfortunate mount in Paul Delaroche’s painting ‘Napoleon Crossing the Alps’ (not to be confused with Jacques-Louis David’s hilariously over grandiose work of the same name). Slowly raising their heads, they give me a lingering and lugubrious look before turning back to their inner contemplation. In some strange fit of fellow feeling, I can’t bring myself to paint them from the warm cocoon of the car so I pile on clothing and step out into the near blizzard.

Perched on the bonnet in what my Father would have called a ‘lazy wind’ (instead of going round, it cuts straight through you), I develop a stripe of snow down my left side making me look like a particularly disheveled bandmaster and I’m troubled with the same old problem of paint freezing in the palette, only now it’s freezing on the paper too and it’s like trying to paint with grains of coloured sand. A farm lad bounces past in his John Deere, eyes fixed on me, mobile clamped to his ear and I can imagine his unlikely tale of the nutter on a bonnet in a blizzard. In the end I manage some sort of picture and slither back to town, grateful to have rescued the day. 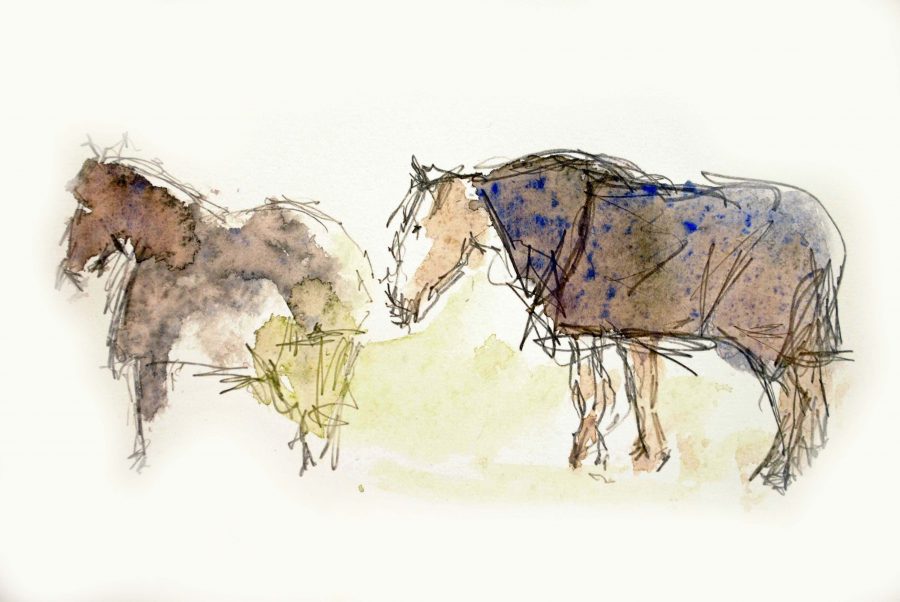