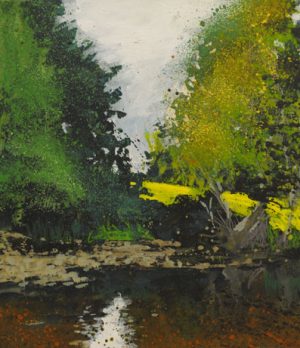 The river Ure snakes through a 350ft gorge cloaked with Oak, beech, sycamore and ash; a dramatic and beautiful foreground to a view that stretches across the vale of York to the blue, distant Hambleton hills. The woodland, dotted with follies, grottos, pathways and ponds testifies to the hand of man in what otherwise might appear to be a natural landscape. It was John Aislabie, famous for his landscaping work at nearby Fountains Abbey and Studley Royal, and his son William who laid out the most dramatic section as a woodland garden in the mid 18th century. Hackfall was to become one of the most important and famous managed landscapes of its kind in Britain.

My own first venture into Hackfall was one early spring morning, hideously clad in shorts and pumps trying to keep up with my pal Alastair on a Sunday morning run. It was I remember, bitterly cold, misty, muddy and mildly humiliating given that Al is a robust 17 stone ex rugby player and I am built on considerably more svelte, and theoretically swift lines. Yet, even as I blundered along after Al, lungs bursting from my chest, I couldn’t help noticing what an extraordinarily beautiful place it is and I promised myself a return visit, this time equipped with paints and brushes. It’s not as if I’d be breaking new ground though, since some 200 odd years before me, the no doubt more decorously clad Joseph Mallord William Turner found his way here and set the bar for painting it in watercolour; so once again I find myself lumbering along in the wake of a superior being! He was on the second of two tours of Yorkshire and the north, putting together a series of studies for a book by Thomas Dunham Whitaker entitled ‘A General History of the County of York’. Sadly Whitaker died before his book was completed, but on the up side the young Turner produced some cracking pictures of Hackfall that otherwise might never have been made.

I’d had a book about Turner as a kid but I’d only looked at the pictures. He turned up in art history lectures at art college but, and I hate to admit this: he’d seemed anachronistic in a world of performance art, the ‘Shock of the New’, Punk and my new haircut. It was only later as I worked my way through Bomberg, Auerbach and Freud that he elbowed his way into my leaden consciousness and I began to learn a little about the art and the man. Great artists of the past can seem remote and shadowy figures even to those who study them, but put a fishing rod in their hands and they take a great stride forward into the light to meet us: put Turner near a river and if he wasn’t painting it, he was fishing it, he is even reputed to have had a walking stick that turned into a fishing rod! According to William Russell in his ‘Eccentric Personages’:

‘The sole relaxation which this remarkable man (Turner) permitted himself, besides certain potations—but it was not till late in life that he at times over-indulged—was fishing. He might be seen wending his way to the river-side, dressed in the oddest fashion—a flabby hat, ill fitting green Monmouth-street coat, nankeen trousers much too short, and highlow boots, with a dilapidated cotton umbrella, and a fishing rod. From early morning till nightfall would he sit upon the river’s bank, under pelting rain, patiently, shielded by his capacious umbrella, even though he did not obtain a single nibble. He was not, however, an unskillful angler, and was very proud of a good day’s sport.’

And the Rev’ S.A. Swaine averred:

‘Turner was as merciful an angler as even the pious and humane farther of the craft could have desired. He would impale the devoted worm ‘as tenderly as he loved him’….. and according to a regular fishing companion, ” His success as an angler was great, although with the worst of tackle in the world. Every fish he caught he showed to me, and appealed to me to decide whether the size justified him to keep it for the table, or return it to the river; his hesitation was often most touching, and he always gave the prisoner at the bar the benefit of the doubt.”

so as I headed river-wards to paint I began to feel, well what? Perhaps not a presence, or an aura, but rather, a sense of time collapsing around me and that strange sensation that the past might be running parallel with the present.

Deep in the gorge and quite close to the river there is a bench marking one of the places where Turner sat to paint, but as I search for a place from which to make my own picture I find myself drawn closer and closer to the river itself and in it, about a yard from the bank, lapped by the river’s ceaseless passage bulges a rock, a round, flat topped rock like a pub table. It stands a good three feet clear of the water so that when you perch on it, your feet are clear of the stream; there is room to sit and spread out watercolours and palette; it is an artist’s stone and it has been warmed by the sun or possibly Turner’s bum. Of course, I can’t be sure that he ever painted from this rock but from here you can look straight down into the water and watch the wild Brown Trout hanging in the current, you can track the kingfisher as he kinks past at eye level, dippers bob and the river gurgles, rushes, dazzles and glints in the sunlight. It is an artist’s stone and an angler’s stone and you can look downstream and get a wonderfully framed view of Mowbray Castle, the folly Turner so carefully recorded in his finished watercolour.

I work away for an your or two with pencil, watercolour and acrylic and then wander further up river where the current slows and the steep sided gorge flattens out to meadowland. In the drowsy afternoon heat, I sit watching lazy trout sipping flies from the water’s surface and here I make the best picture of the day; free I suspect, of the weight of greater expectations.
Turner may have produced the best painting of Hackfall woods but running? I’d have him, no problem!