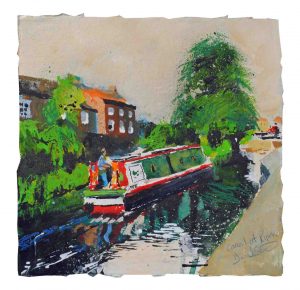 David Stead has been working on a series of pictures in mixed media on handmade paper. this new work is of Ripon canal.

The Ripon Canal was built by the canal engineer William Jessop to link the city of Ripon with the navigable section of the River Ure at Oxclose lock, from where boats could reach York and Hull. It opened in 1773, and was a moderate success. It was sold to the Leeds and Thirsk Railway in 1847, and was effectively closed by 1906, due to neglect. It was not nationalised with most canals and railways in 1948, and was abandoned in 1956.

In 1961, members of the Ripon Motor Boat Club formed the Ripon Canal Company Ltd, and gradually restored the canal up to Littlethorpe. Subsequently, the Ripon Canal Society spearheaded restoration, which was completed in 1996. It is now managed by the Canal & River Trust.