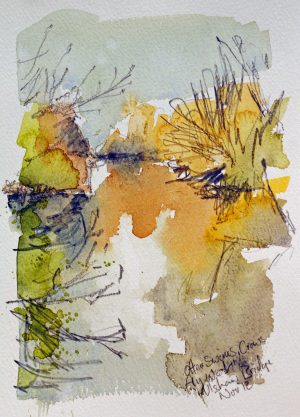 It is my definitive river, the one I grew up with, the one I understand, the one I thought I knew. I had swum in it and played by it as a child, I’d been dragged by my parents on interminable Sunday car rides along its length as a sulky teenager, I’d followed its meanders on foot with chattery girls and boastful boys and as I moved away to art college, I’d abandoned it for more ‘glamorous’ rivers in the south of England – the Thames, the Avon and latterly the Dart. Moving back north I’d returned to my river to fish it for wild Brown Trout and Grayling and as I reclaimed it, the Ure beguiled and mesmerised me once more.

The Ure oozes into life from a porridge of peat & sphagnum moss on Lund Fell, high above Mallerstang in the western Dales. It trickles & tumbles off the fell and turns east into Wensleydale where it is conjoined with innumerable gills, and from a rocky stream, it quickly turns into a full blown river slicing its way through a valley carved and scoured by glacial ice. The river loses height quickly over a series of waterfalls at the lower end of the dale – about 70 mtrs in the three miles between Redmire and Aysgarth alone, and soon it flows out into the plain of York, where it eventually changes its name to the Ouse.

This is the first morning working on a year long project to record my attachment to, and impressions of the river on canvas and paper, in images and words. The logical place to begin is clearly the river’s source on that lofty and barren moor, so inevitably I’m thirty miles away from there in a place perhaps best described as no-where in particular. It is a cold, still morning, a weak November sun gilding the few remaining leaves and I have been sitting painting with my back to the old lichen scabbed bridge for perhaps an hour, stilled by the river’s measured and determined progress. I am working in watercolour and it is cold enough to freeze the paint as I mix it in the palette. My fingers have been gnawed and bitten by the bitter chill and my top lip has the double slug trails of a contented five year old.

A pair of crows fly west over the river and an otter slips into my peripheral vision almost unnoticed, slowly rolling with the current; his presence when detected, electrifying, breathtaking. He is unaware of my existence and I sit, mesmerised; still and silent as a locked up pub. He is sleek and lustrous like burnished bronze and his every movement soundless. Given the otter’s huge home range, I am fully aware that this is likely to be a fleeting encounter, so I wait for him to dive and, never for a moment taking my eyes off the river, grab for my camera. He pops up again a few yards upstream of where I last saw him and I freeze until he continues his leisurely hunt. Pulling the camera from its case I wait for him to re-surface then shoot picture after picture and even as I do so it dawns on me that the camera is set to its manual function; it’s not calibrated for this light. None of the pictures come out and the otter is gone. I have a moment of disappointment and self reproach but it is only a moment and it is immediately replaced by a sense of privilege at having watched one of the river’s most elusive and beautiful creatures.

Packing up my things I make the short drive home to a battered leather chair, a log fire and a glass of single malt. Boots kicked off I thaw my feet by the fire and know that whatever the river reveals to me over the next few months today has been a momentous beginning.