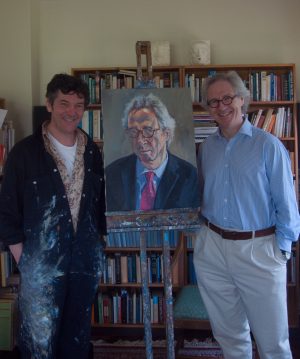 You’ll notice that Jonathan is grinning in the photo; this was the relative calm after the storm. For the previous twenty five minutes he had been bouncing round the room, whooping and laughing hysterically, having been told the portrait was finished. The unfortunate postman, who happened to visit at that moment, was whisked down the drive in what I believe was a Quickstep. An elaborate, yet perfectly executed spin-turn at the gate, brought the pair back to the pile of spilled letters and bills and the poor postie ran off in the direction of the Minster shrieking ‘sanctuary, SANCTUARY!’

I’m aware, of course, that the final sitting can give rise to a certain feeling of relief – the words ‘how do you think it’s coming along?’ being synonymous with ‘are we nearly there yet?’ – but really…….There are limits!

Jonathan, I know, plans a recuperative sojourn in the South West on England and has had several quotes for a haircut; the most promising from Pete Mulcher, the head gardener and renowned topiarist at Castle Howard. As for myself – I shall return to my secluded, almost monastic life, of studio painting, synchronised fly tying and my collection of mid 20th century putty rubbers.

In truth, it has been a pleasure working with Jonathan over the past few weeks and I will miss our chats over coffee and Josh’s cake. I look forward to seeing the painting framed and hanging alongside those of his predecessors.