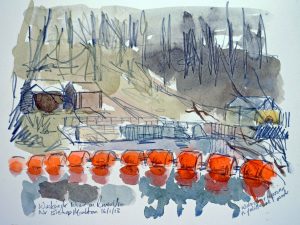 Leaving the car in the lane I wander off down the deserted side track. On the left, piles of steaming manure are speckled with rooks, crows and Jackdaws like currants in a giant fruitcake mix. On my approach the corvids reluctantly take wing, croaking complaint like heavy smokers forced outside for a fag. They flap lazily away over silvery plough and grey into the enfolding mist. According to my map the track peters out into a footpath, but after a couple of hundred yards it gives no sign of doing anything of the kind, so I go back for the car, stirring the cake mix once more.

The track remains wide enough for the car and eventually it double-bends into a grassy little car park where I’m surprised, given the hour and the day, to find another vehicle. Pulling in alongside I gather my painting kit and camera and amble off towards the river. The Ure divides here forming an island, allowing boats to navigate past Westwick weir via a lock which scoops them up like a proud father gently lifting his child to balance along a wall.

The lock gates are still hoar frosted, and white woollen cobwebs drape from the paddle beams. There are no boats on this wintry day so I cross the lock onto the eyot via a little footbridge and a stout wooden gate marked ‘access for anglers only’. Bone white trees shard the slate and cerulean sky and as I slither and stumble over the frozen ground the still grasping tendrils of last year’s brambles clutch at my legs.

The island is secluded, silent, secret almost. I stand for a moment absorbing the sense of aloneness and then wander on and soon the sound of the weir begins to elbow into the silence. As I progress it gets louder and more insistent and then, crashing and barking out of the undergrowth, bounds a Bull Terrier; I must have leapt a yard into the air but the dog bounces around excitedly, showing no desire to rip me limb from limb. I have a furtive look around to ensure no-one witnessed my fright-leap and I press on with my new-found friend skittering about until we come across his owner who is fiddling with a spaghetti of wires spewing out of a green metal box by the side of the weir. He turns and smiles, ‘David Bamford’, he says, ‘Ure Salmon Trust’. We shake hands and he tells me that the green box with its attendant solar panel is a salmon counter which despite being well above the level of the river, had been water damaged during the recent flood. I try to imagine the river raging through the valley at this level; it must have been an awesome sight.

David tells me about the recent success of salmon on the Ure – how they are returning in ever increasing numbers to the spawning beds higher up and the trust’s efforts to record and further improve their habitat on the river and its tributaries. Poor water quality in the tidal Ouse and Humber estuary largely due to inflow from West Yorkshire’s industrially polluted rivers had meant that until recently Salmon and Sea Trout had been unable to access the Ure and numbers had declined rapidly and catastrophically in the mid 20th century. Happily though, thanks to a pollutant reduction in tributary rivers such as the Derwent and Calder and the solid efforts of various organisations to make changes, the future for this beautiful river and the migratory fish for whom it is once again becoming a spawning ground, looks considerably brighter.

Leaving David and his dog I wander along beside the treacle black and silent river. Above the weir a huge orange safety boom spans from bank to bank lending colour to an otherwise muted scene and despite its plastic incongruity I rather like it, so I find a convenient fallen tree to sit on, spread out paintbox, pencils etc and make a quick picture. The evidences of man magnify the sense of isolation here and though I can no longer see where he was working I somehow know that David has gone and I have this unfamiliar and dormant little island to myself.

It is bitterly cold so I’m soon on the move again and this time to the island’s upstream prow where a stand of mature Beech trees tower above me like elephant’s legs. It’s a place for the underage consumption of booze and fags and the hurried couplings of youth. The trees bear witness and are pock-marked and scarred with graffiti – ‘Benny ’75’,  ‘Piss off by AJ’ and ‘Will loves Georgie’.  I sit with my back to one of them and begin another picture. Once again I find myself drawn to the hand of man  – a road sign – only this is a river sign ‘Danger Weir Keep Left’. It too has its splash of warning red and along with colour it lends linearity to the riverscape. Time passes unnoticed, a wood pigeon applauds itself into the sky from the trees on the opposite bank and a pair of mallards squabble up river, then all is quiet again.

As I pack up and begin to meander home in the fading light there is a loud sploosh and the expanding rings of a rise spread out across the mirrored water towards both banks. My first thought is a large trout; but had David’s newly mended salmon counter just registered another digital tick?