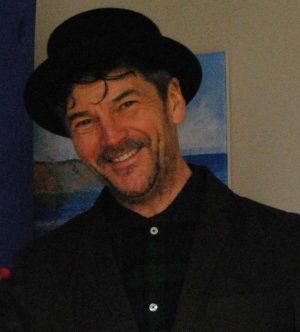 David is an artist and writer, born Yorkshire, 1960. After studying fine art in London, he became a full-time artist living in London, Gloucestershire and more latterly Devon where he met his wife Becky, a specialist educator in the field of autism. The couple moved back to Yorkshire in 2001 to set up David Stead Gallery which has since been the principle outlet for David’s work. David Stead Gallery also exhibits work by the renowned Devon based ceramicist Colin Kellam.

After working in the same studio above DSG for 15 years David recently moved to a larger space at the beautiful Norton Conyers House about four miles outside Ripon. This allows him to work on a more ambitious scale and also gives him a teaching space.

David’s writings on the River Ure Project and other themes can be found on the literary web magazines ‘Caught by the River’ and ‘Island Review’, in print at ‘An Antidote to Indifference’, and they have been serialised in The Dalesman magazine.

“Much of my work over the past few years has been project based with many paintings following a theme such as the ‘River Ure Project’ which follows the river from source to sea, ‘A Summer’s Lease’, documenting life at Norton Conyers, the self explanatory ‘London Waterways’ and ‘In The Footsteps Of Turner’ which is now part of a television series for German production company Gerbrueder Beetz called ‘Vistas of Longing, Artists and their Landscapes”.